Meet the National Summit on the nursing workforce speakers 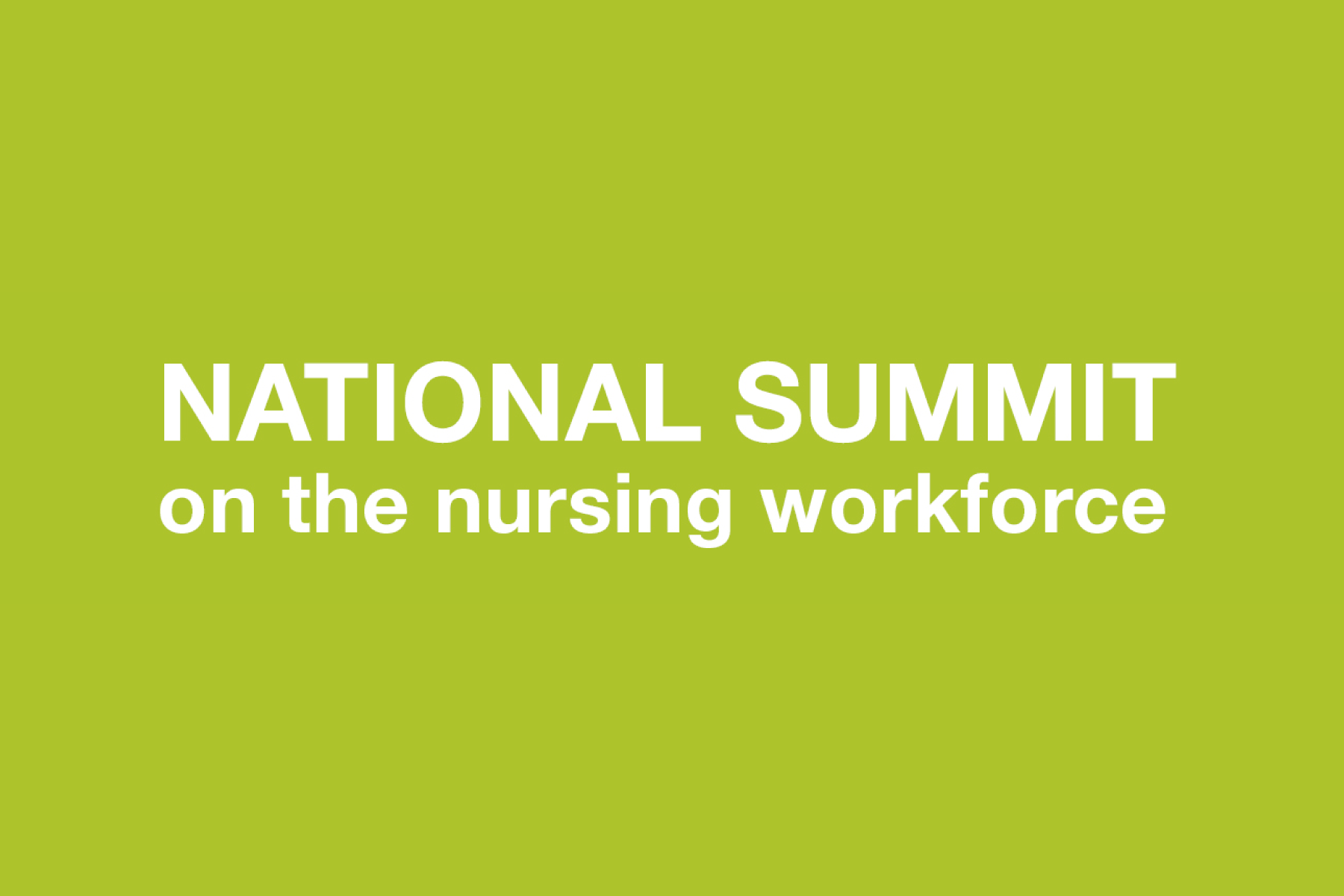 The National Summit on nursing workforce to be held on 14 October 2021 brings together nursing organisations and stakeholders nationally who are closely involved in the current issues impacting the nursing profession in Australia. This historic event is an opportunity to provide recommendations and proposed solutions to the Australian Government, including the Minister for Health Greg Hunt MP, and other representative organisations, including jurisdictions.

More information on the event can be found in the official flyer. Participants are encouraged to join the conversation on social media using the hashtag #NursingSummit.

Christine Duffield is an internationally renowned and passionate nurse who has worked tirelessly across direct care, consultancy, academia, research and in leadership roles to spearhead the advancement of the nursing profession  in Canada, New Zealand, the UK, and Australia for over 40 years. She is a Professor of Nursing and Health Services Management at Edith Cowan University, Perth; Emeritus Professor University of Technology Sydney and President/Chair Australian College of Nursing.

Having published over 200 research papers, Christine was named in Mendeley’s Top 100,000 Cited Researchers of the World in 2020. Christine is also the Associate Editor for the International Journal of Nursing Studies, the most highly ranked international nursing journal.

Kylie Ward was born and bred in the outer western suburbs of Sydney. Life was simple but Kylie wasn’t. She was a dreamer. What she didn’t know then, was that she was destined to become one of the most influential health professional leaders of her country and a formidable, passionate advocate for health, women and equality.

Kylie currently serves as the CEO of Australian College of Nursing (ACN). She has led a program of transformation at ACN, turning around membership numbers to increase revenue and tripling student numbers – all within five years.

She has done this by leading the ACN community to find their relevance through policy leadership, political and industry influence. ACN is now Australia’s beacon for Nurse Leadership.

Kylie holds honorary academic appointments with five leading Australian Universities and was ministerially appointed as a Director to ADHA (Australian Digital Health Agency) and NHMRC Health Translation Advisory Committee (HTAC) whilst holding numerous other board positions. In 2020 Kylie was named as one of the Top 100 Health Voices for LinkedIn worldwide and in 2021 was recognised as a National Influencer by AuSAE, the leading body for Association Executives.

Kylie has served on Senate and Parliamentary Inquiries and gave evidence at the Aged Care Royal Commission of 2019.

In 2017, Kylie won Telstra Businesswoman of the Year in ACT for Purpose and Social Enterprise.

Alison is a Registered Nurse with a Critical Care Nursing Certificate, a Bachelor Degree in Education, a Master of Business Administration. She has held senior executive roles in government and health services within Victoria including the Chief Nursing and Midwifery Officer and Director of Quality, Safety and Patient Experience.

Alison is a member of the Australian Health Protection Principal Committee contributing to advice provided to the National Cabinet during the COVID-19 pandemic and, as Co-Chair of the Infection Control Expert Group providing advice and information on best practice on infection prevention and control in the community, hospitals, aged care, schools and community sport.

Alison has been a part of a team providing communication to the community, which  is clear, honest, and compassionate. She was awarded a Public Service Medal in June 2021 for outstanding public service to driving the Government’s national health response priorities during the COVID-19 pandemic, particularly to infection prevention measures.

Tanya Vogt was appointed the Executive Officer of the Nursing and Midwifery Board of Australia in July 2014. Tanya has been working in the area of health practitioner regulation in Australia since 2007, and has been directly involved in the development of the National Registration and Accreditation Scheme in Australia.

Tanya has qualifications in nursing and law and has practised in both areas. The combination of these qualifications has provided a solid foundation for her roles in health practitioner regulation and especially in the role of Executive Officer for the Nursing and Midwifery Board of Australia.

position since November 2014. Prior to this Fiona was the Chief Nurse and Midwifery Officer for the Department of Health and Human Services in Tasmania for over ten years. In this role, Fiona was the nominee from the health ministry in each state

and territory on the ANMAC Board for a period of three and a half years. Fiona has a broad range of nursing experience in Australia and the UK working within the Acute Care and Community environments. Fiona has also undertaken work in associated health care environments in Tasmania including Correctional Health and Youth Justice. Fiona has also been a member of several National Committees and Boards including Health Workforce Australia and the Community Services and Health Industry Skills Council.

Professor Georgina Willetts has over  30 years nursing experience and more than a decade of experience in leading nursing and midwifery reform within the health care industry, moving to academia in 2011. She has completed two educational programs at Harvard Macy institute in Boston USA and continues to be a visiting faculty there, she received her doctorate  of education in 2014 and was awarded the University wide Monash Teacher Accelerator Program honours in 2015.

Georgina is currently Head of Discipline & Course Director in Nursing within the Department of Health Professions at Swinburne University, where she established a new discipline of nursing and contemporary nursing curriculum using innovative teaching strategies. Her clinical interests are medical/surgical nursing, models of care, interprofessional practice/education and professional identity. Her research interests include translational research into the areas of health care education, health care workforce, and the performance of professional identity in practice.

Georgina has been an active member of ACN and the Royal College of Nursing for more than 15 years, she is involved in the ACN Policy Chapters and the Emerging Leaders program. Georgina is a Fellow of ACN.

Yvonne has worked in Nursing, Learning and Development and Corporate leadership roles within the NSW Public Health System and managed a private GP practice in Mosman. After 30 years of experience in operational and strategic leadership roles, Yvonne joined the Australian College of Nursing (ACN) in December 2018 as the Executive Director of Education.

In her current role as Executive Director Education she has led key initiatives in 2020 and 2021 to support the pandemic response and beyond. These initiatives include the Refresher program, the COVID19 Vaccination Training Program, the Aged Care Transition to Practice program and the Immunisation for Health Practitioners course. Her areas of interest are helping others evolve through transformational leadership, organisational culture engagement, and developing nursing, education, and workforce solutions.

Yvonne holds a Bachelor of Nursing, an Oncology Certificate, a Graduate Certificate in Human Resource Management, and a Master of Business Administration. In 2021 Yvonne completed a Certified Reviewers Course through the Higher Education Leadership Institute.

Sue is a registered nurse and has worked in numerous roles as a senior clinician and executive. She was the former Chief Nursing and Midwifery Officer of the Northern Territory (NT) and the Executive Director of the Hazard Management Authority, which held governance and accountability for NTs COVID-19 response.

Sue is committed to the developed of others and participates in regular coaching and teaching. She enjoys collaborating with health staff to solve wicked problems that deliver improvements to service delivery. Sue is a Fellow of ACN and Board member.

Linda is a Registered Nurse/Midwife with more than 47 years of experience. This includes experience in Tertiary Quaternary, Teaching, Major Metropolitan, Regional, District and Rural Centres.

Over the last 30 years Linda has worked in senior nursing/executive leadership roles across New South Wales and Victoria. She has completed tertiary studies and holds a Degree in Health Management with UNE and a Masters Health Service Management with UTS. Linda has held Conjoint appointments as Senior Lecturer at the University of Newcastle and as a Clinical Fellow at the UTS.

Linda is currently in the role as National Director for Professional Practice with the Australian College of Nursing. Linda believes in the power and influence of the nursing profession as a leader in the health care team and the ‘voice for the patient’. Linda also promotes nursing’s value in determining and influencing the current and future agendas of healthcare across Australia.

Tiffany King joined ACN in August as a Chief of Staff. Prior to joining ACN, Tiffany was the Group Executive Engagement & Advocacy at the Pharmacy Guild of Australia. She has also worked in the National Incident Room for COVID-19 during the first wave where she was responsible for stakeholder communications.