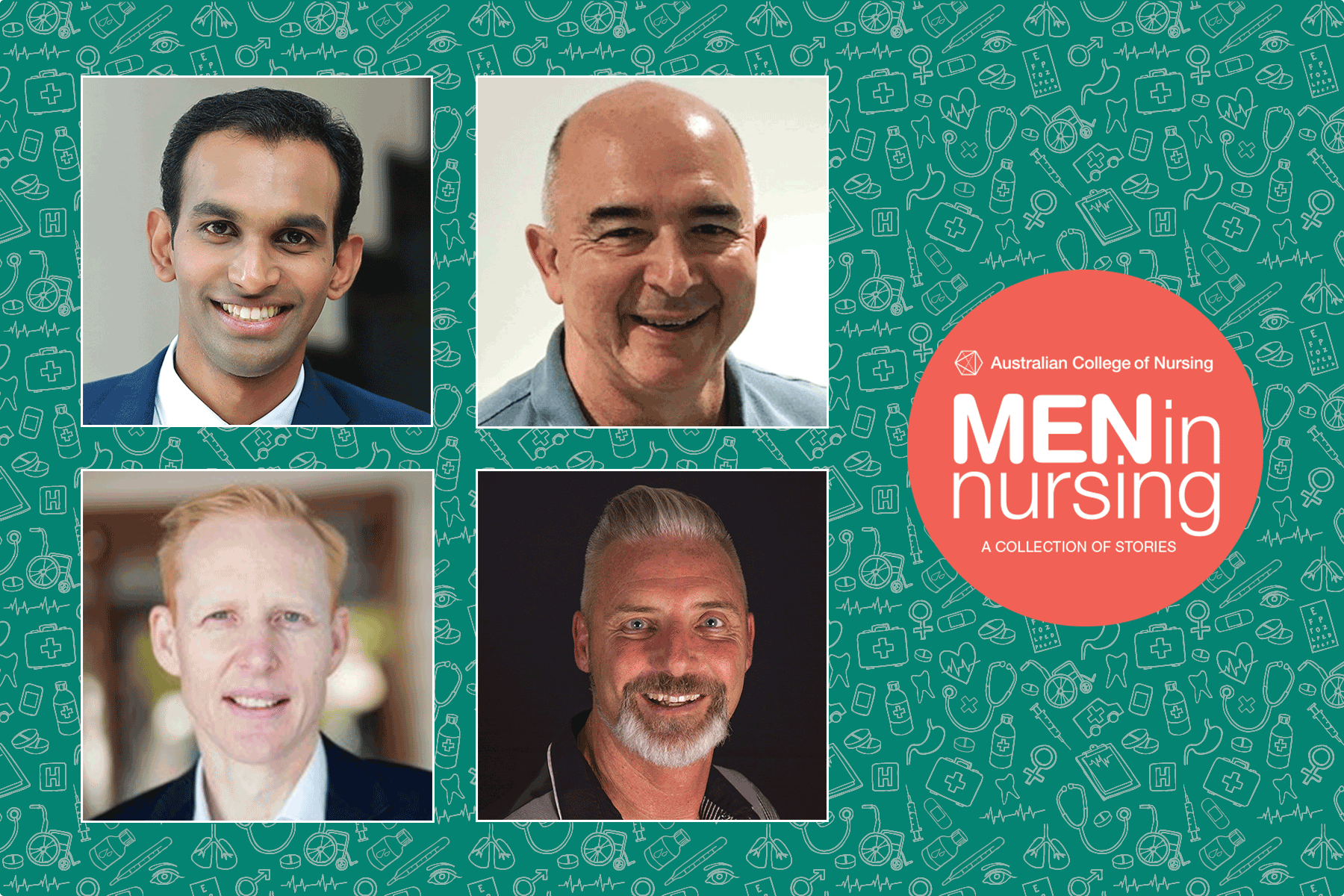 Each nurse has a special story to tell about how they enter and continue on a path through our profession. Nurses come from all different backgrounds and life phases but are united under a common goal of caring for others.

The final article of our Men in Nursing Impact Series shares the stories behind what led four men to become the nurses they are today. Each personal story gives a snapshot of the motivations and profession’s pathways available to those who are thinking about pursuing a career in nursing.

“I was fully trained in the military hospital system,” he says.

“I was privileged to have been in active service in war zones, humanitarian service operations and peacekeeping with the UN. After many years of overseas service, I was discharged from the military.”

After his discharge, Drew’s journey took a pivotal turn which resulted in the nurse he is today.

“At the time, the state boards did not recognise the military scopes of practice, so I registered as an Enrolled Nurse,” he says.

“I decided to change my nursing career and study the pathway to becoming a Gerontologist. I have loved every step of my journey and have remained an EN ever since!”

Nursing runs deep in the family of Mal Fraser MACN, who works as a community nurse in Far North Queensland.

I was inspired by my mum who was also a community nurse for many years in Western New South Wales, and my wife is a nurse too,” he says.

“One of the most gratifying things about a nursing career is that it has enabled us to work together as a family to juggle raising a family while supporting each other with work and studies.”

During his career, Mal has gone on to specialise in providing men’s health to his communities.

“I have worked in pediatrics, maternity, indigenous health, community-based cancer and palliative care and community health for the last 10 years,” he says.

“As I moved into community health and began to develop my interest in men’s health, I completed graduate certificates in men’s health and prostate cancer nursing. I am passionate about men’s health, particularly the health needs of rural men, and about improving health care through male-friendly services. “

“I grew up in a small country town where my primary school had less than 20 kids in the entire school,” he says.

“Encouraged by my parents, I went to university to study a dual Arts/Business degree majoring in psychology and marketing. While at university, I discovered and through friends was able to get a detailed understanding of what nurses did. After two years, I took a big step and transferred to nursing and have loved it ever since.”

After finding his passion, Lee has gone on to have a diverse career in several areas of nursing prior to his current role as a nursing executive.

“I have worked in many different roles within nursing including Registered Nurse, Registered Midwife and Nurse Practitioner,” he says.

“Now, as a part of the executive leadership team, I provide a nursing view to all aspects of managing a health care organisation. Working in leadership and management positions within nursing is a privilege and a challenge.”

Arun Thomas MACN has embarked on a hard-working journey of nurse leadership to reach the position he is in within our profession today.

“I was born in Kerala, South India and bid my family farewell when I was 18 years old and came to this beautiful country to pursue higher education,” he says.

“My strong desire to help vulnerable people and make a positive difference in people’s lives promoted me to commence a Diploma of Enrolled Nursing at TAFE, South Australia, followed by a Bachelor of Nursing in 2013 at the University of South Australia.”

In addition to his love for aged care nursing, which you can read in the first article of this series, Arun is passionate about transforming the lives of young people.

“I am passionate about mentoring, advocacy and leadership,” he says.

“My mission, now more than ever, is to help and empower young people through mentoring along with championing and advocating for health care and safety and quality for vulnerable people in Regional Victoria.  I was privileged to be named as 7News 2019 Victorian Young Achiever of the Year.

The  ACN Men in Nursing initiative has also seen the creation of an eBook, video series and Guiding Principles document aimed at addressing the shortages of men in the nursing profession. Learn more about the initiative by visiting acn.edu.au/men-in-nursing.