How nurses are made invisible, and our complicity in this 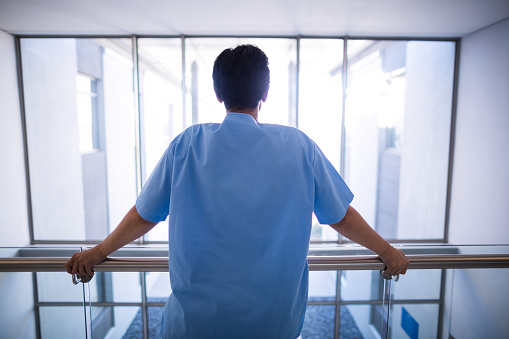 The invisibility of nurses in management and policy decisions, relative to other health care professions, continues to frustrate and confound us. I argue that sexism, ageism, uniforms and traditional healthcare hierarchies are four ways in which nurses are marginalised and silenced – but when it comes to perpetuating this invisibility, are we more responsible than we might imagine?

Australian nurses are predominantly female, with women comprising 89.3% of the nursing workforce (AIHW 2016). It is widely accepted that women occupy a less privileged position in society relative to cis men (Brown 2009). Women, on average, earn less, are less likely to dedicate themselves to postgraduate study, and are less likely to occupy management positions (Brown 2009). Indeed, the rise of male nurses to management roles is disproportionately fast relative to their qualifications and experience, compared to the ascent of female nurses into management (Brown 2009). Women have largely been socialised into speaking less than men, taking up less space than men, and deferring to the judgement of men. Nursing as a profession is hampered and silenced by society’s gendered preconceptions of the women that make up the large majority of this profession. However, the phenomenon of lateral violence, in which a nurse intimidates or bullies another nurse, demonstrates how female nurses can express their frustration about their limited agency in the patriarchy by exerting negative power over their vulnerable colleagues: other female nurses (Croft & Cash 2012; Purpora 2012). Nurses are, to some extent, uncomfortably complicit in the sexism that prevails throughout society and restricts the nursing profession from attaining greater influence in policy and management decisions.

The average age of an Australian nurse is 44.4 years (AIHW 2016). More than a third of nurses are over fifty years old (AIHW 2016). Ageism is prevalent and has been normalised throughout Australian society through euphemisms, such as the ‘burden’ of our ‘ageing population’, jokes about ‘senior moments’, and cosmetics designed to help people appear younger than they are (Chrisler et al. 2016). Older nurses are more likely to be silenced and marginalised by virtue of our society’s attitude towards their age. Further, women are judged more harshly for their age, and its physical manifestation, than men are (Chrisler et al. 2016). Nursing being dominated by women opens us up to this negative side-effect more than other non-female-dominated professions. The older average age of nurses contributes to us being made invisible when attempting to influence policy and management decisions. However, ageism does not appear to be something that nurses specifically are complicit in maintaining to their own detriment; it remains, instead, an example of how nurses are silenced without our own complicity.

Nursing uniforms can, depending on one’s perspective, be regarded as a hard-earned badge of honour, a symbol of a united and professional front, or a veil that dehumanises nurses and acts as a barrier between them and their patients (Sherwin 2015). Nurses uniforms can symbolise power and control; for example, in my hospital, they clearly distinguish a Nurse Unit Manager from a Registered Nurse (Sherwin 2015). Uniforms are generally functional and practical for patient work, enable the patients to identify nurses, and indicate that the person wearing that uniform is a professional (Sulanke & Shrimp 2015). However, such benefits seem not to be required of doctors, who, one might argue, patients can also generally identify and recognise as a professional despite wearing free dress. While nurses around Australia are expected to wear clean, pressed uniforms, medical students and doctors can attend patients wearing anything from a three piece suit, to a cocktail dress, to jeans and a t-shirt. Uniforms are arguably a way of dehumanising the nurse into an impersonal ‘other’, such that if the patient was not paying attention, the nurse on one shift would blur into the nurse on the next shift and so on. I contend that by one health care profession being required to wear a uniform while another is not, this supports a systematic inequality that undermines and silences nurses and reinforces the health care hierarchy. Nurses have, over time, voted to keep their uniforms, while doctors refuse to consider uniforms, perpetuating this cycle of inequality and marginalisation in which nursing loses out to other, more dominant health care professions (Naughton, 2014).

Nurses have long been socialised into selflessly and diligently performing the orders and directions of physicians and hospital management (Urban 2014). While this attitude continues a strong historical tradition of nurse as subordinate, modern nurses are uncomfortably complicit in upholding the patriarchal and medicine-dominated hospital hierarchy by minimising our knowledge and skills (Urban 2014). How many times has a highly capable and experienced nurse stepped back to instead let a medical intern perform venipuncture, despite that submission delaying the blood test for half an hour while the intern is located, then in turn, inexpertly locates a vein. Patients are admitted under a physician or surgeon’s name, while a never-ending rotation of anonymous nurses follow their directions (Croft & Cash 2012). While such subservience is pressed upon nurses as essential to maintaining ‘order’ and patient safety, it is also an example of how nurses consent to remain invisible in the shadow of other, more powerful professions higher in the healthcare hierarchy.

Our future as a profession

The purpose of penning these examples was not to accuse nurses of being the source of our own problems. I am proud to be a nurse, and yet I have found myself guilty of every example I have enumerated above. I wrote this article to remind my treasured and respected fellow nurses to be more aware of the impact that our own actions have in perpetuating the broader societal attitudes towards our own profession. Just because our reality surrounds us should not cause us to blindly accept it as inevitable. Our every action is a choice for the kind of future we want as a profession.