Inside the writing of The Trilogy: Our nurses in Gallipoli (Scarlet Poppies) 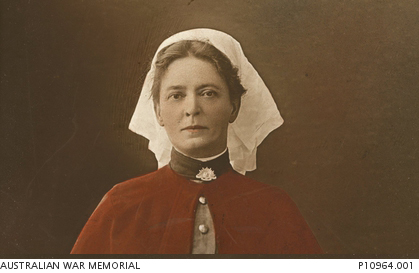 While researching the duties of Australian nurses during the Gallipoli campaign it became apparent that it was not smooth sailing for a number of our colleagues. I became interested in the service of Evelyn Vickers Foote who enlisted with the Australian Imperial Force (AIF) and attempted to join the Australian Army Nursing Service (AANS) but was informed that there were sufficient recruits for overseas service. However, she was told that she could enlist with the British nursing service (known as the QAs). She and more than a hundred Australian nurses did not want to miss the chance of overseas service so they were recruited for the QAs in Australia.

In May 1915, Evelyn was nursing aboard the British Hospital Ship Assaye, which was taking on the Gallipoli casualties. Initially, she found the system of transferring the wounded soldiers from the beach onto smaller, open ferry type transports (known as lighters) to the larger hospital ships efficient. However, she was distressed to witness the casualties being “shelled coming over to us. It was terrible the shelling of the lighters. Shrapnel. You would get wounded men being killed coming over on the lighters”.

After four months on the Assaye and two years with the QAs, Evelyn was “getting homesick for Australians” so decided to resign from the QAs and try to re-enlist with the AANS. This proved somewhat difficult because she had to return to Australia first. Evelyn and two of her Australian colleagues managed to get a passage on the Mongolia in June 1917 from Port Said (Egypt) back to Australia. Sea travel was fraught during the war as the Australian nurses soon discovered. They were 45 miles from Bombay (present day Mumbai) when the ship hit a sea mine. Evelyn recalled that “it was exciting all right. Noon. Sank in less than 15 minutes. Out of sight in that time”.  While they survived the sinking they endured further administrative difficulties but finally reached home. Evelyn was the only one of the three who was game enough to re-enlist with the AANS and she saw service with her Australian nursing colleagues on the Western Front (France).

It was discovering nurses like Evelyn Vickers Foote who made researching and writing the Trilogy and compiling the Nominal Roll (the two nurses who did not re-enlist with Evelyn are not recorded in the official AANS records but are included in the Nominal Roll) worthwhile: so many inspiring nurses who just kept putting their hands up for more work. Her narrative is spread throughout Scarlet Poppies and Veiled Lives but if you want a sneak peak of the nursing contingencies for Gallipoli see Chapter 5 of Scarlet Poppies. If you are interested in a more in-depth analysis, Veiled Lives includes a chapter on the complex nature of the Gallipoli Campaign from the Turkish and the allied perspective as well as special reference to Shell-Shock.