Inside the writing of the Trilogy: Australian nurses in India (Scarlet Poppies) 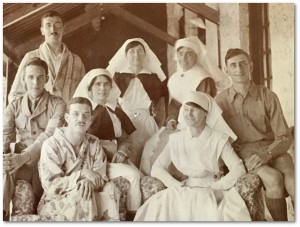 I was surprised to find that five hundred Australian nurses served in India during the First World War, caring for the mainly British casualties of the Mesopotamia Campaign. Even more surprising was that their service was not considered ‘war service’ but ‘home service’ so their names were not included in any official roll. If they served in another theatre of war their names were noted but they are listed in the Nominal Roll which forms part of ACN’s The History of Australian Nurses in the First World War box set trilogy.

The adverse physical, psychological and cultural conditions they endured are detailed in Scarlet Poppies (chapter 9) but none demonstrates the injustice of their treatment more poignantly then the Deolali incident which is outlined in this chapter (have a sneak peek here).

However, in Veiled Lives I followed individual nurses throughout their service and was struck by one in particular, Letitia Moreton from Victoria. As I wove her experiences in Egypt, where she cared for the Gallipoli casualties with a beautiful letter home to her mother describing the commemorations of what was to become ‘ANZAC Day’ (not until 1923), I  became aware of the gentle nature of this young women, who had already endured much. Letitia’s descriptions of barrier nursing those with the dreaded influenza gives any modern day infectious control nurse a wonderful glimpse into the everyday working conditions of our nursing predecessors. However, it is Letitia’s final transfer to India where she finds herself in the remote outpost of Quetta (modern day Pakistan) with a group of British personnel, none of her Australian colleagues, which I find saddest. The British personnel were wonderful to her but her painful death from typhoid coupled with the knowledge that her patient mother would never receive another chatty, loving letter from her beloved daughter stays with me.