The Scrubs that Fit: MANaging change 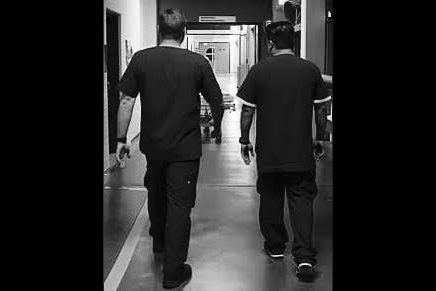 This column, The Scrubs that Fit,  is all about the highs and lows of being a junior nurse, from the perspective of an ACN Emerging Nurse Leader. The aim of these blog posts is to help ease the transition from university to grad years and beyond. Find Lucy on ACN’s neo and or Instagram @aussie_nurses.

2018: where parents are choosing to raise their children as gender neutral, people are demanding the segregation of “boys” and “girls” toys to be removed, so they are simply seen as childrens’ toys and we now recognise fathers to be sole carers of children, exemplified by paid parental leave not just maternity leave. No matter which side of the debate you support, there is no denying the progress that gender equality is making, so how is it possible that there are still many professions with a large gap in gender equality?

Since attending NNF 2018 I have been thinking a lot about men in nursing. The topic was raised more than a few times throughout the Forum, but it really got me thinking. Through presentations, hard hitting questions to keynote speakers and ongoing conversations, this topic was featured throughout the Forum. It’s important as junior nurses that we open lines of communication and model the acceptance and importance of gender equality at work.

Together, with an emerging nurse leader I met at the 2017 NNF in Sydney, Craig Sullivan, we will explore and acknowledge barriers and strategies for men in nursing. We are a female dominated profession, there is no denying it. Is this because of the nature of the work? Or could it be influenced by public opinion and history? Throughout the NNF 2018 there were many theories and suggestions on why this is, and my general conclusion is that it is a mixture of both. We recognise we are not able to investigate all the barriers to men in nursing in one short article, but our aim is to start a conversation to minimise or remove as many of these barriers as we can. Since the NNF I have collaborated with some fellow nurses from around Australia to debunk some of the common misconceptions and get the conversations started for men in nursing. I have been working closely with Craig Sullivan, to see a male perspective on the current issue. After hours of conversations and ideas we decided to put it all on paper. Our aim is for nurses who are men to be the norm, making the singling out of genders redundant, no more “male nurses”! Now I’d like to introduce Craig.

My name is Craig Sullivan and I am Year 2 Registered Nurse. I work within the surgical division of my local hospital within NSW. I am particularly passionate about the student placement experience, workplace diversity and patient advocacy. I decided to study nursing when I needed a career change. I have always worked with people and knew I wanted to continue that path. Caring for people and providing a voice for them in their time of need was the largest appeal to begin my nursing journey. When I signed up for nursing I personally was so naive to the role of a nurse. The scope of practice was far beyond what I had initially imagined, and I fell further and further in love with nursing, not only as a career but as a journey. There are many stories that float around regarding men in nursing and their experiences. Fortunately for myself I have had only positive experiences from colleagues in the workplace. However, issues have risen from the social and patient perception of men in nursing. I see these as an opportunity for education. After all, how can I hold this against the patient or society if I didn’t even fully know what I had originally signed up for? Part of this I believe is media portrayal and the historical image of nursing which still stands to this day. Below Lucy and I will articulate some of our modern-day issues.

Florence Nightingale is widely accredited to paving the way for modern nursing. This is mostly uncontested, however one facet in the modern era of nursing that still needs to be rectified is an equal position and representation for men in nursing. It is commonly known that the Nightingale era was the demise of men in nursing and although in recent years progress has been made, the gap remains.

We recognise the history during Nightingale’s lead and acknowledge that excluding men from nursing may have been a necessary and unavoidable step to ensuring the importance of her work was distinguished. There is minimal to no literature in why Nightingale enforced a female workforce. As society and times move forward, the gender gap in nursing remains an issue at large especially with the workforce shortages now and forecasted.

Albeit improved, there are still stereotypes surrounding men in nursing. These can range from perverted views of why men entered the industry, to questions about sexuality and stereotypes surrounding the workforce as a “woman’s role”. Craig has experienced all of these reactions from patients and societal perceptions within the community, however not from colleagues. To this day, the historical representation of nurses remains in many patient’s minds. With an ageing population the majority of the patients we presently see are 65+ years of age. We have personally lost count of the amount of times that we have had patients state they had no idea how broad a nurse’s knowledge is and the technical tasks they complete. We are a strong advocate for all our patients to ensure they have the greatest outcomes, but are we advocating the reality of the role and scope of our profession to society as a form of education and attraction to our workforce?

Craig and I asked a small group of friends and colleagues who identify as male and are nurses in Australia a few simple questions. We were blown away with their willingness to respond and their incredibly insightful answers. We would like to thank these men for their contribution to this article and for their on-going hard work and resilience in nursing.

Why do you think there aren’t more men in nursing and what issues been encountered?

“Majority of middle aged and up seem to think of male nurses as an oddity. Like there’s some reason why we’re in this job other than the simple fact we want to be here” –Mike, Emergency, Sydney

“Often being referred to as doctor or asked if I am a doctor due to being male” –Matthew, PACU, Adelaide

“The common misconception that nursing is primarily a ‘woman’s’ role and if you’re a bloke doing nursing you must be a failed would-be doctor or you have some sort of ulterior motive are the greatest misconceptions I’ve encountered” –David, Undergraduate Student, Newcastle

“As a male there is an expectation that we are all emotionally tough, therefore we can take the abuse of aggressive patients…I have on multiple occasions been pre-picked to ‘deal’ with the abusive patients because as a male I can take it, and this can put me in very frustrating and dangerous situations depending on the level of aggression from some of the patients” –Alex, Emergency, Mildura

What attracted you to nursing and what aspects do you enjoy?

“I think just being able to help people at a difficult point in their lives while in hospital can be a very rewarding feeling.” –Matthew, PACU, Adelaide

“I love the flexibility of the career choice. I personally enjoy the challenge of seeing a problem with a patient, trying to work out what is wrong and then how best to manage that issue.” –Joe, PACU, Adelaide

“It is the feeling of knowing that there is a person in the community that would otherwise not be there or would not being the same health as they are now because of you.” – Alex, Emergency, Mildura

“Wanting to make a difference. I spent most of my time during my youth at nursing homes, listening to the stories of the residents there whilst visiting my grandparents. The stories they told me helped me realise that happiness arises the most from giving, not receiving” –Kieran, Emergency/Education, Adelaide

How do you believe we can attract more men into the nursing profession?

“I think more advertising on the realities of nursing rather than the misconceptions. By showing that nursing is in no way just a “girl’s” job” –Shaun, Emergency, Melbourne

“I am a big believer in promoting autonomy and increasing our scope of practice. I think as we grow as a profession we will attract more males to the workforce” –Ryan, Neonates, Melbourne

“By supporting the role of men in nursing the same way gender equality and feminism is being supported today. The issues we are facing with men in nursing relates strongly to a stereotypical view. Break the mould.” –Kieran, Emergency/Education, Adelaide

The consensus was there are minimal to no issues that are male-specific, with the only few that are mentioned being attributed to public opinion and misunderstanding about nursing roles and the need for diversity in a nursing workforce. None of the nurses interviewed had any issues within the workforce that were gender-specific that have made them reconsider nursing. Each nurse was asked why they chose nursing and if they are still enjoying their work. Although each person has had a personal journey to where they are today, each of the responses depicted that they are ALL happy being nurses.

Within the large community of nursing, there is minimal and often no resistance to men entering the workforce. Although only a small sample of colleagues have been questioned they have been lucky enough to not encounter it. With this topic being discussed mostly by senior nurses at the National Nursing Forum 2018 and our pool of colleagues being more junior it can be derived that things are improving at a workplace level. The main issue continues to be the perspective of the public, the lack of understanding of a nurse’s scope of practice and requirements. This means men are not aware of the career prospects that nursing holds. The history of nursing in Australia and the western world, media portrayals and misinformation are the main three reasons men are not joining the nursing workforce. Strategies to amend this include ongoing education with patients, families and the public. On a personal level, you can educate people daily and in everyday practice on this. On a workplace level, encouraging men to excel and on a business level, campaign to the public about the importance of nursing and what it offers everyone.

Did you find this interesting? Read the rest of Lucy’s The Scrubs that Fit posts.