Inside the writing of the Trilogy: Our nurses in Salonica and on the home front (Veiled Lives) 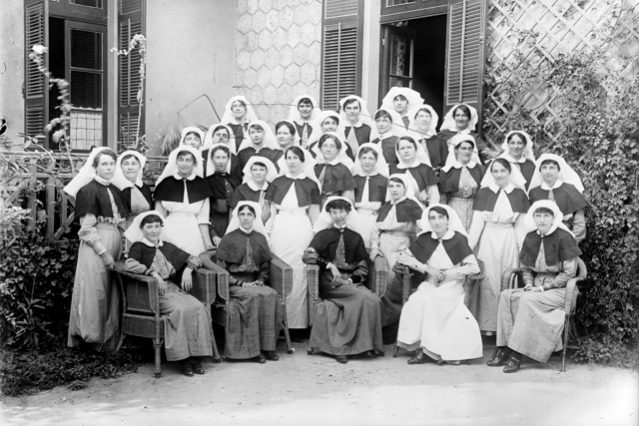 It may surprise you to learn, as it did me, that Australian nurses served in Greece, whereas Australian soldiers did not.

In July 1916, Jessie Tomlins and Dora Mearns who trained at Sydney Hospital were two of 60 Australian Army Nursing service (AANS) nurses who responded to a specific request of the British Government. Jessie was disappointed her friend and training colleague, Ione Nowland, was not also chosen. Jessie was nursing at the 14 Australian General Hospital (AGH), Cairo, under the leadership of her training matron, Rose Creal, when the first Battle of Gaza (26-27 March 1917) took place; she continued to nurse the Australian Lighthorsemen throughout the war (see From Narromine to the Nile, Book One, for further details).

Ione Nowland finally made it to Egypt and while her reunion with her friend, Jessie, was heartfelt she was determined to nurse the casualties of France but was instead sent to Salonica. Rose Creal actively dissuaded her nurses from volunteering for service in Salonica because she found nurses were returning to Egypt ‘enervated’ and ill. Nonetheless, nurses were needed and Ione embarked on the hospital ship Manitou on 4 August 1917 with Gladys Walter and Gertrude Munro; they arrived in Salonica soon after.

It is important, when using primary sources, to note the circumstances of the information being used. For instance, the Kellett interview of Gladys Walter is much different to a letter she sent to an unnamed colleague who had obviously also served in Salonica. The interview, elicited after the war from a formidable matron, was upbeat and circumspect. However, when I compared the letter that Gladys sent to her colleague at the time of her service I found her opinion more direct, possibly more honest. Her letter describes how ”two years have altered one’s opinion. God’s garden is not here! This damnable country, enervating and malaria-sodden, soul-blasting and mind demoralising, is like the harlot who with false graces and charms, lures to destruction. And we have paid her toll in deaths, ruined constitutions and broken spirits”. While one Australian nurse died in Salonica many were invalided home – their spirits and bodies broken after the war.

That one nurse was Gertrude Munro who was admitted to 42 British General Hospital (BGH) on 1 October 1918 suffering from the effects of malaria and influenza. She was nursed by special nurses (now called infection control nurses) and the most gracious and competent Matron McHardie White or one of Sister Munro’s friends was always in attendance during her final ten days. This knowledge may have been of some comfort to her mother Emma and father Alexander.  She died 10 October at 12.10am and was buried the next day in the Church of England section of the British War Cemetery, Mikra (grave 591), with full military honours.

Ione Nowland did not endure the hardships of Salonica easily and returned to Egypt with ‘nervous debility’ 12 months later. She required four months of convalescence after being repatriated home. By this stage she was still a young woman, 30 years of age, and like many returned nurses had to earn an income. She joined the Nurses’ Registration Board (roughly equivalent to AHPRA) and among other duties inspected training schools. Ione was appalled by the conditions under which nurses lived and trained during the Depression. When the Lang Labour government advocated compulsory union membership, Ione Nowland, via a suggestion from Jessie Street, formed the NSW Nurses’ Association, becoming the first president in 1931. She was one of a number of returned nurses who worked tirelessly for the benefit of us all.

Have a sneak peek of the third book of The Trilogy, Veiled Lives, for more information on the origins of the war.