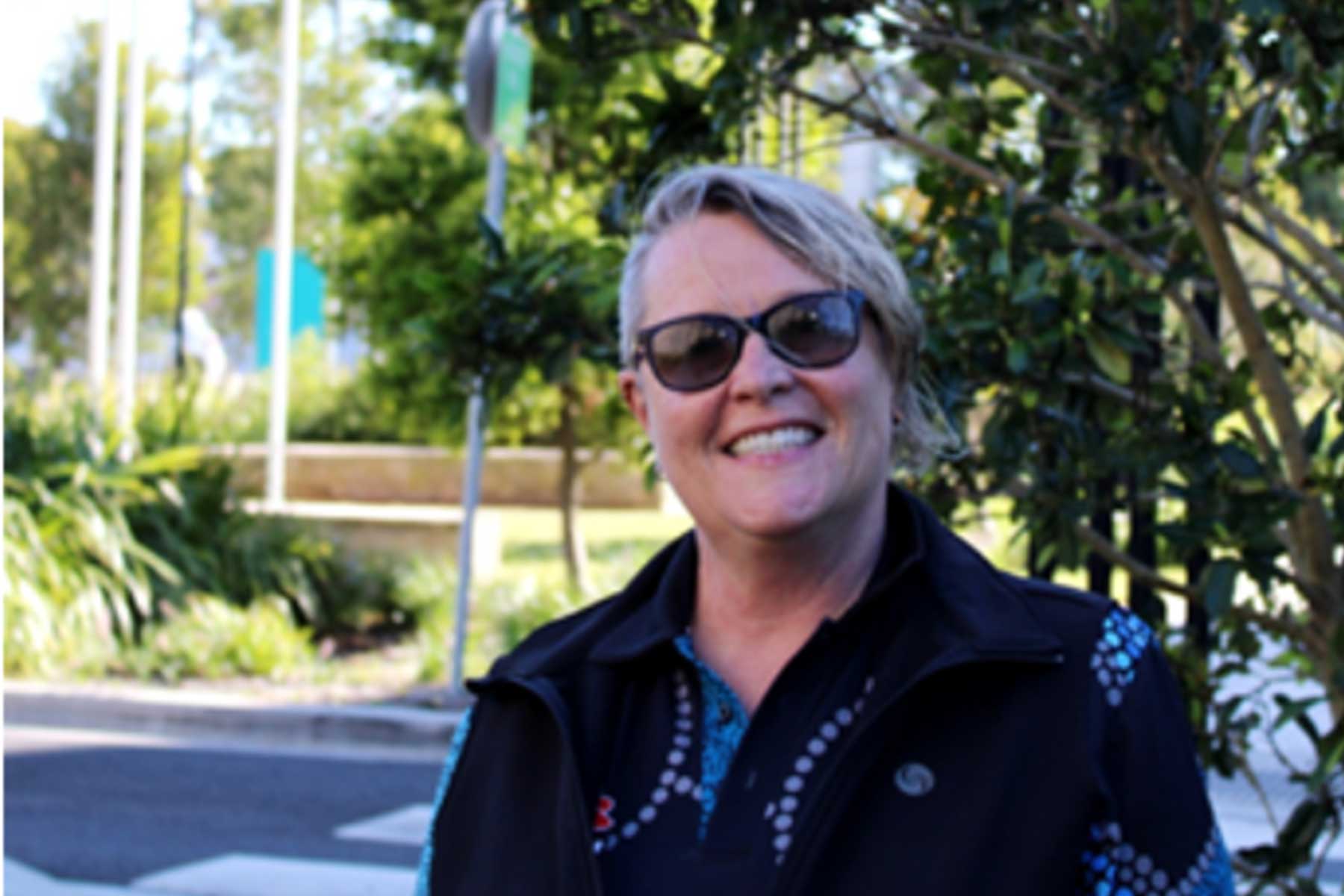 From 1997 till 2008 I was working in Zoos and veterinary practices in Sydney, Darwin, Adelaide and Perth. I gave keeper talks within that framework, always with a dreaming or storytelling reference around our Native fauna.

Knowing My Indigenous Blood Lines (Barkindji), I wanted to give back and bring in culture awareness somehow.

So, in 2008 I changed my direction and began working with people in the Disabilities Health sector as a support worker. I watched community nurses coming into my client’s homes and thought to myself I could do that!

Seeing them encouraged me to look at nursing and my first thoughts were remote nursing in my people’s community but being a low-income worker, I felt I could not afford it.

I then stumbled on the Puggy Hunter Memorial Scholarship Scheme, and I researched who “Puggy” was (Arnold Hunter, a health Activist) and was proud of how he fought through the struggles of his time, that sadly still exist today.

I contacted my Aunty Jean who was at that time Elder-in-Residence at Western Sydney University and she said “go for it.”

As a white skinned Barkindji mature aged woman I did struggle with applying as I didn’t want to take the place of a Brother or Sister that has struggled with systemic racism and unfortunately lateral violence. It took me some time battling with my conscience with equity and thoughts of ‘do I really need a scholarship?’ as I was not an academic or even thought at my age I might not have the time to study.

However, over time and talking it out with family and friends I knew what my goal was, and I decided to take the first steps as I wanted to give back to my people.

My acceptance was amazing and exciting, and I still had my niggling sense of why me? I felt I was being guided.

I knew what I wanted to do and give back, so I concentrated on that thought.

I began my training in South Australia, Adelaide (Kaurna) in a Diploma of Nursing and naively thought I could work in remote areas. However, as I became more knowledgeable in how nursing works, I realised enrolled nurses were not able to work remotely at that time.

I wasn’t confident to do registered nursing as I am hopeless at maths, so I continued along my path with “Puggy” by my side. I joined CATSIN (as it was named then) and I continue to be a member of this organisation now called the Congress of Aboriginal and Torres Strait Islander Nurses and Midwives (CATSINaM).

For two years, in all my presentations and essays I devoted my topics to the inequities in First Nation people’s health and shared the REAL history of Australia within every Health topic I was to present on. As I was in a dominant non-Aboriginal class I needed to educate (that’s “Puggy” telling me)!

My student colleagues were aghast at hearing the truth and many wanted to know more, and I felt they were generally interested and learned Black history for the first time.

Upon graduation I worked at Murray Bridge Hospital (Ngarrindjeri) and Daw Park Repatriation Hospitals (Nukunu) in South Australia wearing our flag on my uniform on every shift. Murray Bridge Hospital was 60kms from home but has a high Indigenous population, so I loved working there and connecting and travelling was not a chore.

I applied my passion to being an enrolled nurse with a mixture of clinical and mental health nursing in the urban environment when I returned to Sydney in 2011. I worked as a community nurse in Redfern (Gadigal), Mental Health Nurse in Randwick (Gadigal & Bidjigal) and in 2019 I was Aboriginal Immunisation Officer at Hornsby Hospital (Darug & Kurringgai) for one year.

Everyone I worked with were aware of my passion for my people and I often became a person to be called upon for First Nations advocacy.

Moving forward now to 2021 I studied again! I completed the Graduate Diploma in Indigenous Health promotion at the University of Sydney (Gadigal) in 2021.

Currently I am a practice nurse with the first established Aboriginal Medical Service Organisation in Australia (est. 1971) and have been for three years.

Looking back, I would never have thought I’d be doing what I can to bring about change and that is all thanks to the Arnold “Puggy” Hunter Memorial Scholarship Scheme. I have been blessed and so grateful to the scholarship to get me where I am today.

I was adopted out of my Barkindji bloodline and grew up with a white family on the Northern Beaches of Sydney (Guringai). I left at 17 and lived all over the Inner city of Sydney from Clovelly (Bidjigal and Gadigal) to the east to Annandale (Gadigal) and also further out to the Beautiful Blue Mountains (Gundungurra and Darug) prior to moving to Darwin (Larrakia) in 2000 to which I’ll never forget my time there. I then lived in Perth, Western Australia (Nyoongar) and then Adelaide Hills (Peramangk) in South Australia. Who would have thought my life would complete a circle and I now live back on the Northern Beaches Sydney (Guringai).

I have had a lifetime passion to give back to my people as my Scholarship “thank-You “explains. My hobbies are playing Guitar, Banjo, going on country escapes and looking after my Fur Babies. The simple life for me.

Applications are currently open for the 2023 Puggy Hunter Memorial Scholarship Scheme. Established by the Australian Government as a tribute to the late Dr Arnold ‘Puggy’ Hunter, designed to encourage and assist Aboriginal and/or Torres Strait Islander undergraduate students in health-related disciplines to complete their studies and join the health workforce. More details including eligibility criteria can be found here.